What sparks our passions for Garden Design?

What sparks our passion for garden design?

A visit to the Humphry Repton exhibition at Woburn Abbey this summer provided an opportunity to consider this question for myself. I realized it was my early years and outdoor experiences in Woburn spawned a deep sense of connection to, and interest in the Landscape and outdoor spaces.

I am the youngest of three brothers, close in age. Our father was a priest, and in 1965 when we were aged 2, 3 and 4 he became vicar of Woburn church. The vicarage is just next to the main entrance gates to the Abbey.

Woburn was a very rural village at that time, before Milton Keynes and the exponential growth in the South East. It seemed to my mum and dad a rather closed in and insular place, but for 3 boys emerging into the world, it was a treasure trove of adventures.

Woburn Abbey grounds have numerous lakes between the village and deer park, the most accessible being Upper Drakeloe Pond, ‘the lake’ as we used to call it. A great source of tadpoles, fish, and excitement; from an early age we explored it voraciously. The lake is still encircled by wonderful mature Cedar of Lebanon trees, with marvellous low hanging branches for climbing and bouncing on. Adventures too numerous to mention happened here, but framed in us a sense of wonder and connection with the landscape and being in outdoor places. 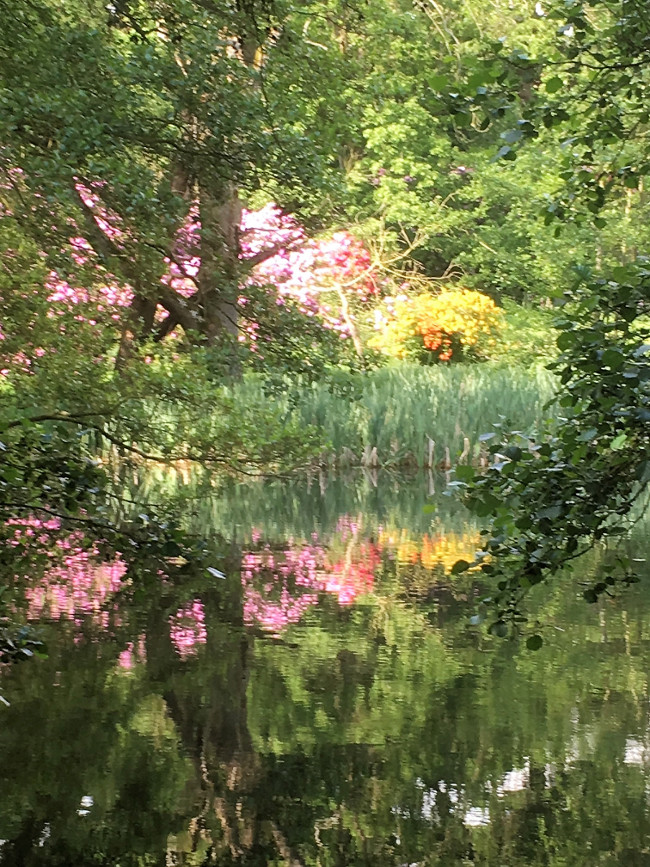 These adventures were set against the opening up of the Abbey grounds to Woburn Safari Park. Magical creatures were being introduced, Sea lions in the lakes, monkeys on an island; who knew what you might find?

Our house being large and a vicars income little, we had various lodgers (both human and animal), who worked as rangers in the safari park . Our menagerie of donkeys, goat, dogs and cat had to cope with other more occasional visitors, either orphaned or injured, rescued by the rangers, including a Soay lamb, who was found, run over, with its back legs broken and was bottle fed back to health, and ‘Colonel Blimp’ a poorly male baboon who would pick through your hair to groom it. He would bark and ‘wahoo’ every morning.

This would be enough for any adventure thirsty boys, but the purpose of writing this is to tell of somewhere else, another lake, a hidden lake that to us became known as “The Secret Hiding Place’. I should say at this point, given the reverence with which we hold the place, that I have my brothers authority to talk about this, as it has been nearly 50 years! 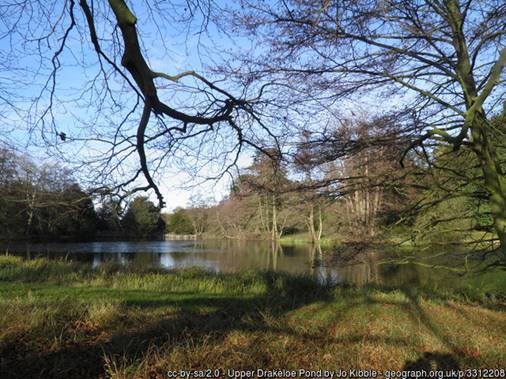 The vicarage garden was bordered on 3 sides by what seemed at the time to be a 5ft wall. I realise now it was only around 3ft high with a chamfered brick coping. Present a boy with a 5ft (3ft) wall and he will climb it. He will climb it and then walk precariously along it. This boundary wall extended across the back of the garden, then rose to 6ft (4ft) around a paddock until it reached another larger 12ft (7ft) wall. This wall was in fact part of the vast wall system that defines the boundary of Woburn Abbey grounds.

Which of us was the first to climb it? I’d like to think it was me, but alas, I have to credit one of my brothers, either John, biggest and strongest of us, or Patrick, daring and a good climber. This point of discovery is the moment I want to capture, the curiosity and challenge that led us there, what was over the wall? We could see trees, but what else?

It was only a matter of time before we made it over..

Around where the 6ft (4ft) paddock wall met the 12ft (7ft) boundary wall, was the top of a yew tree poking up, this was the way down. In later years this became a regular route, but that first moment of climbing up to the top of the 12ft (7ft) wall to see over, the thrill and excitement was palpable in all of us. The other side of the wall was densely branched with other trees, we needed to climb down. Down the dense red scaly Yew branches to the ground, emerging through thick Rhododendrons into.. a forgotten paradise! A lake glimpsed at first, then opening out as branches were parted to a wide stretch of water. Every manner of bird life, and lake creatures, coots echoing calls, sudden splashes, the occasional complaint of duck. It seemed closed off, its own universe, and we had found it. When I think of this unique moment, a powerful feeling of connection takes hold of me. What a privilege it was! It might have been the Dukes private lake we were trespassing around, but it belonged to us! Another lake had sea lions, what was contained in these watery depths? One day we discovered a 3ft (5ft) catfish dead on the lake edge, we dragged it home of course! We later discovered Catfish can grow to 10ft and live for 60 years. This fed our expanding imaginations of huge child eating monsters.

At the far end was an island, connecting this island to the lake edge was a metal framed bridge with wooden boarding. In our time, the boards were mostly rotten. The only way we could cross it was to walk on the right hand edge of the boards, and after they crumbled by clambering over the frame.

In late May 2018, I found myself back in the Abbey grounds with my brothers and good friend and garden designer James Scott MSGD, with the intention of visting the Repton exhibition and old haunts. 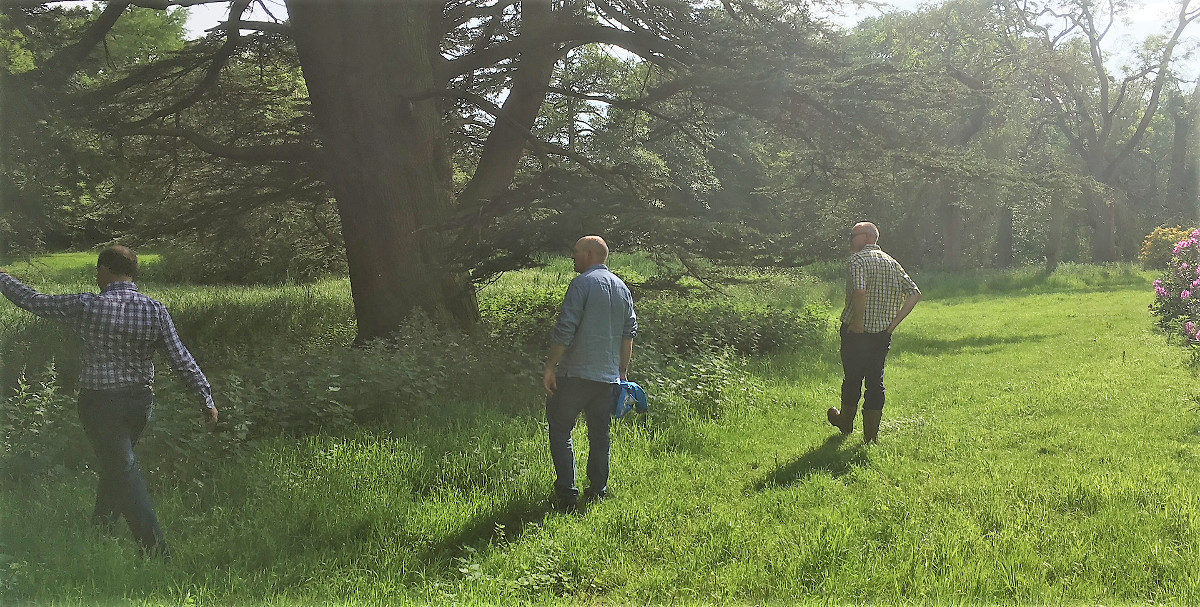 In my mind I had Repton pouring over plans for the Secret hiding Place, conjuring the magic. Did Repton create the lake and island with a sweep of his pen? In fact access to the detail on his work was somewhat limited, at the exhibition, his red books being under glass. Maybe they’re best kept there, so the mystery remains.

More surprising to discover were parallels with modern Garden Design. Repton began working as a Landscape Gardener (He is credited with being the first to call himself this) in 1788 aged 36, a similar age to many who take up Garden design as a second career, the sixth career in Reptons case. His method of producing Books and innovative presentation set him apart from his peers, something all Garden Designers strive to do.

Having been unsuccessful in several careers, it seems Repton needed to prove his ability, no more than at Woburn, where he met, and fell out with the architect Henry Holland. Holland was a partner of Capability Brown, and married to Brown’s daughter. Differences with other professionals (Jeffry Wyatt who came later, and also disagreed with Repton’s approach) suggests a large ego, as much as a desire to prove himself. This had Repton changing a terrace designed by Holland, only to be replaced later by Wyatt. There must have been some convincing arguments!

These design changes at Woburn, the use of several experts over the years, reminds me of the transitory nature of Garden Design, how long our influence exists, the sense of legacy, more fleeting now than in Reptons day. Also fickle clients; a love of Chinoiserie – the building of the Chinese pavilion – is this the equivalent of a Hot Tub or outdoor kitchen in modern terms? Aspiration? Fashion? A display of wealth and luxury? These are also motivations for modern Garden Design clients.

As children, somewhere in our subconscious we knew this place had been created by someone, the identity wasn’t important at that time. As a garden designer I understand the heritage of the place. One of the greatest Landscape Garden Designers ever considered his work at Woburn his greatest achievement. Was the Secret Hiding Place part of his grand project?

My challenge in the very defined gardens that I work in is to create ‘found’ spaces, whether for 2 year olds or 82 year olds. I could never aspire to take on the grand landscapes of Repton’s time (Think of the professional indemnity insurance!). I don’t know whether Repton had a concept of a found landscape or not. But that’s the direction his creation at Woburn has steered me, and I am grateful.

I’d better get back to work!